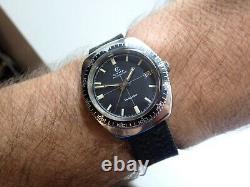 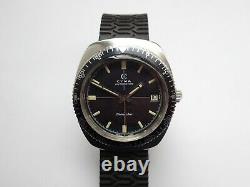 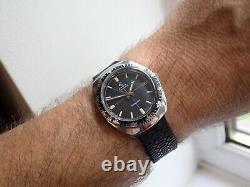 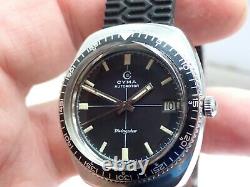 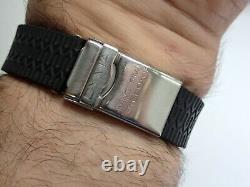 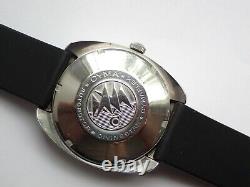 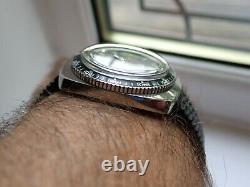 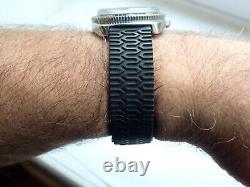 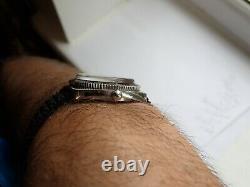 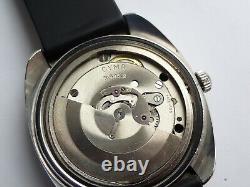 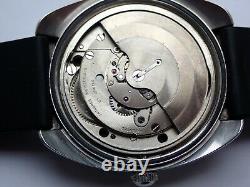 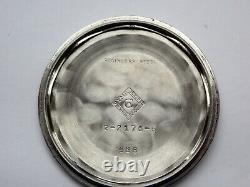 Behind the brand of Cyma. A wonderful example of a very rare pre-owned CYMA'Divingstar' Autorotor 20ATM diving watch that has been professionally cleaned and fully serviced by my watch guy. The stainless steel case has not been polished and is in lovely condition. The crystal is original just look at it in houses an automatic Cyma Cal. 485.2 with date and measures in at 38mm or 40mm including the new crown at 3 o'clock. The beautiful black cross hair dial, dual-purpose bezel and hands are stunning.

The watch comes a lovely black rubber strap that has a fabulous and also its has CYMA DIVING STAR AUTOROTOR ON THE CLASP i would not thin this came with the watch new but its a lovely touch just to finish this fantastic vintage 1960s diver off please see photos this watch is in lovely condition bit of a time warp watch i think best i have ever seen ever the lume in the hands still looks good and the markers this are a rare watch full stop as its got the CMMA -Tavannes 27 jewels R. Excenter regulator for stud carrier. Patented double-excenter winding with jewelled rollers (for low height). An intermediate wheel between minute pinion and the rest of the train allows big balance and low profile without reducing the sturdiness cf. Moreover this layout allows to place the seconds wheel either in the centre or for a sub second, without further modifications.

Fusing timeless elegance with contemporary flair, Cyma timepieces are the descendants of a long tradition of watchmaking that stretches back one-and-a-half centuries. The name Cyma has its roots in the French word cime, meaning summit, which, in turn, is derived from the Latin word cyma, meaning a shoot. It is a name that reflects not only the companys constant striving for perfection but also the inextricable link with its birthplace in the Jura Mountains of Switzerland.

Initially, it was the harshness of the climate in the high valleys of the Jura buried for more than half the year beneath deep snow and frequently cut off from the outside world that gave rise to watchmaking activity during the long winters of isolation. During the 18th century, the efforts of the regions industrious and ingenious inhabitants gradually led to the establishment of fully-fledged workshops for the design and manufacture of watches, and by 1780 watchmaking had developed into a process involving 30 distinct operations. Inheritors of the horological gene that pervades the Jura, the two brothers Joseph and Theodore Schwob decided in 1862 to set up their own watchmaking company, Cyma, focusing much of their attention on avant-garde mechanical production techniques.

Indeed, with its ongoing achievements in technical innovation, Cyma was one of the companies that made Neuchâtel the renowned centre of the watchmaking industry it is today. Some 30 years later, the brothers went into partnership with a businessman called Frederic Henri Sandoz who had created a new watch company in Le Locle, another cradle of fine Swiss watchmaking. By this time, Cyma had established itself as a pioneer in the manufacture of intricate repeater watches, high complications and chronographs.

The daily production was 150 pieces. From the early 20th century onwards, the company received numerous awards, notably for its prowess in extra-slim watches. In 1903, it was awarded the coveted chronometer certificate issued by the Neuchâtel Observatory for its invention of a new extra-flat lever movement fitted inside a pocket watch. Two years later, Cyma introduced the calibre 701 with a thickness of just 3.85mm a remarkable achievement for the time. In recognition of its watchmaking feats, the company won first prize at the World Fair in Brussels in 1910.

Output, meanwhile, had risen significantly, with some 2,500 movements being assembled daily in the workshops. From 1915, Cymas highly skilled designers and technicians were elaborating shock-resistant movements of unparalleled strength, along with the first waterproof models, which were finished to an equally high standard. During the 1920s, the company was at the forefront of component interchangeability, which enabled its workshops to produce watches on a much bigger scale. By 1929, Cyma boasted the biggest workshop in Europe and employed 2,000 people to assemble 4,000 watches a day.

In the same year, the company received first prize at the International Barcelona Exposition. While mens watches still accounted for the lions share of the business, in 1930 Cyma made an early foray into the ladies market with the Captive. It quickly became known for its elegance and precision, and was adopted by the legendary French writer, Collette, who was then at the height of her fame.

She described the watch in her characteristic style: It is a captive in the most romantic sense of the word... Sensitive and compliant, it yields if you handle it masterfully, revealing its face, divulging all its secrets, and each surrender simply adds to its charms..

In 1943, Cyma unveiled its first automatic wristwatch, endowed with a 420 calibre featuring a unidirectional rotor. This presaged the Autorotor 485 calibre of 1957.

The brands reputation was further enhanced with innovative products such as an eight-day mechanical alarm clock with single winding key (1945), the Sonomatic alarm clock (1957), and the gold Time-O-Vox alarm clock watch, which received official chronometer certification in 1956. The latter was the only one with the pleasant timbre of that period to ally a 464 calibre, 12 1/2 inch, with a single barrel and small second. The 1960s saw the launch of the Cyma-Navystar collection, showcasing an ultra-flat case that combined precision and perfect water resistance with refined elegance. More than 20 international patents protected the technological innovations conceived specifically to allow these timepieces to resist shocks such as immersion, under particularly demanding circumstances. In 1980, breaking with the past, an extra-flat steel watch from Cymas modern era, endowed with a manufactured 6 x 7 3/4 calibre, scooped the Bijorhca gold award in Paris. With the arrival of electronic watches, Cyma demonstrated its ability to adapt to technological evolution by launching the 1.2mm-thick, extra-slim Calibre 131 in 1984. To date, more than a million units have been produced and Cyma is an acknowledged specialist in thin quartz movements. The item "Super Rare CYMA Swiss'Divingstar' 20ATM Vintage Diving Watch, Cyma Cal. 485.2" is in sale since Thursday, September 10, 2020. This item is in the category "Jewellery & Watches\Watches, Parts & Accessories\Watches\Wristwatches". The seller is "ianwoodland63" and is located in Blackpool. This item can be shipped worldwide.