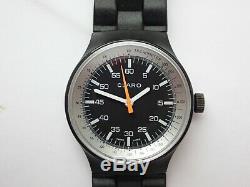 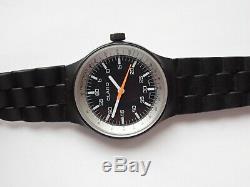 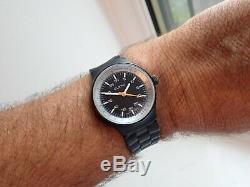 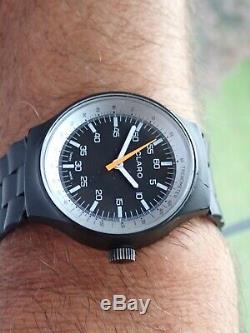 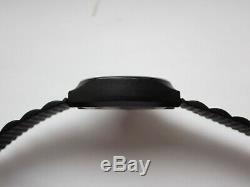 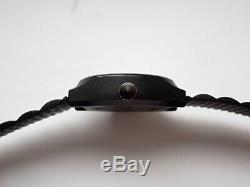 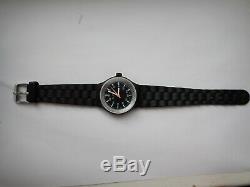 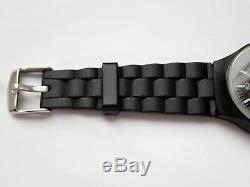 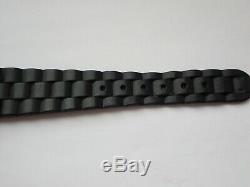 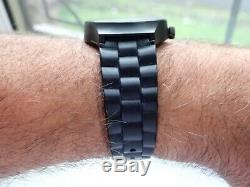 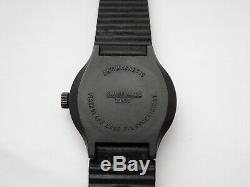 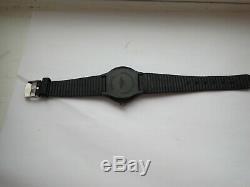 Mens Large 17 jewels hand wind 70s Claro Vintage Rally Tachymeter Rare Swiss Made Watch For Sale Inspired by the Porsche Design watches of the 70's, brands such as Claro, Buler's'Grand Prix' , Agon's'Indianapolis', Cimier and Lucerne produced light noryl fiber made black rally tachymeter style watches with bold orange seconds hands Noryl Fiber watches of this sort are now a rarity (even more so in this condition with the original strap this is a time warp watch also Timex made a model just like this in the late 1970 called the black max i also have a near mint one of them coming up for sale with original strap which is very hard to find). This is the only one I have seen with contrasting white on the dial! In Very Good Condition best i have seen A large watch 38 mm (in crown) x 44mm lug to lug CHECK OUT MY OTHER ITEMS FOR SALE! Movement: mechanical hand-wound with 17 jewels. Case material: ultra-light monocoque case made of fibreglass. Bezel 36mm case 39 mm 42mm with crown 44mm lug to lug 11.5 mm deep 218mm lugs. Strap material and length: rubber original strap approx. 220 mm without buckle or just over 8.5 inch.

Age of watch: circa 1970s. This timepiece is in very good condition, with signs no real of wear i can see , see photos.

This timepiece has been tested and functions well, power reserve and precision not tested, water resistance not tested, this is not a. Colour deviations from the original are possible due to varying light sources.

These principles remain the hallmark of our company and they guide the decisions that we make. Under the tutelage of his watchmaker father, George Josef von Burg learned the meticulous craft of watchmaking at an early age. In his 20s, he demonstrated a singular ability to produce and sell his own private label collection of mechanical watches.

During the 1950s, he moved to America with his family to set up a production facility designed to produce watch-related components for the US market. Shortly thereafter, he acquired a Swiss company to produce watches for other Swiss watch brands. In 1961, George Josef von Burg founded CLARO Watch SA to handle production of mechanical pin lever movements and watches.

In 1967, CLARO Watch SA, in tandem with the von Burg family, initiated its overseas expansion with a sales office in Hong Kong. In 1969, they set up a watch movement assembly factory with BFG, Basis Watch and the Ritz Company in Hong Kong.

By the end of 1969, they opened yet another factory in Seoul, South Korea, assembling EB (Ebauches Bettlach) and Ebosa SA Mechanical Movement Calibres. At the time, both the Hong Kong and South Korean operations were among the largest producers in the market, with the von Burg family managing all sales activities. In 1975, the von Burgs set up one of first movement assembly factories in the Peoples Republic of China. William Mosset of Ronda SA set up SEPRO Limited in Aberdeen, Hong Kong to produce Ronda Mechanical Movement Calibres. In 1978, Frabrique dEbauches de Sanceboz SA entered into a joint venture with the von Burg family to produce mechanical calibres ES 95 Lever Movements and the ES 55 Pin Lever family - first in Switzerland and then later in Hong Kong.

They subsequently developed a quartz analogue line of calibres, starting with the 1198, which eventually became the famous ISA 1198 and other ISA Movement Quartz Analogue Family. Erwin Bernheim of Mondain SA founded Swissebauches Limited in Hong Kong to assemble Gents Automatic Mechanical Lever Movements under the calibre no.

The item "Vintage Rally Tachymeter Claro Inspired by the Porsche Design Rare Swiss Made" is in sale since Tuesday, September 1, 2020. This item is in the category "Jewellery & Watches\Watches, Parts & Accessories\Watches\Wristwatches". The seller is "ianwoodland63" and is located in Blackpool. This item can be shipped worldwide.