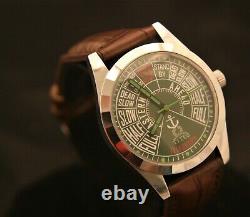 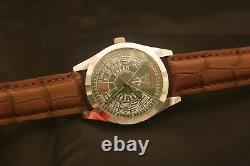 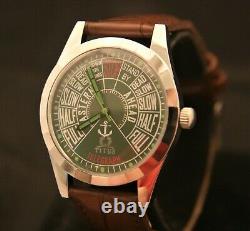 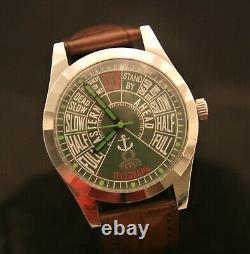 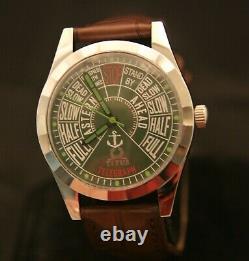 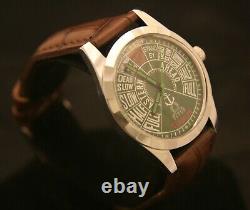 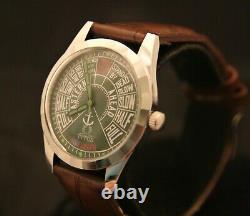 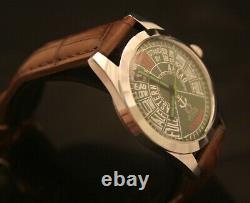 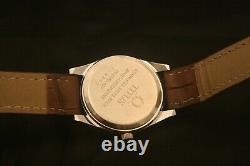 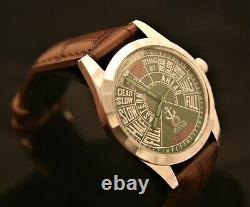 If you, or someone you know, is a maritime enthusiast, it's "All Ahead Full" for this vintage Swiss wristwatch from the 1970's. This is a handsome, rare, Swiss vintage Solvil et Titus men's wristwatch in beautiful restored and serviced condition! It features a 35.7 mm bright chrome-plated case, excluding crown and lugs, with faceted bezel. The beautiful green dial features a ships engine room's full telegraph dial, complimented by black outlined olive hour and minute hands, olive center sweep, and white outer chapter with olive hour markers. Finally, to complete the restoration, the 17 jewel, manual wind movement, signed Solvil & Titus, has been cleaned & serviced and is keeping excellent time.

This beautiful timepiece features a snap-down back and has been fitted with a new man-made brown embossed leather strap with stainless buckle. Was born into the small. That led the Swiss watch industry of the time. The historic birthplace of watch-making industry, and received his diploma at the age of 13. He was then trained in several of the major watch makers and worked at his family's Vulcain manufacture until 1892 when he founded his own brands: Solvil (whose items were often signed Paul Ditisheim) and Titus (whose items were generally marked separately). Through its manufacture, Ditisheim was instrumental in developing the new generation of.

Improving them grandly through his studies on the impact of. He invented the affix balance. Thanks to his inventions, he was able to make the most precise chronometers ever made.

By 1903, his watches were awarded by the. In 1912, he won the world's chronometric record of the. He also worked closely with.

And has been considered the father of the modern chronometers. Solvil et Titus Ditisheim's devices constitute the most important progress of modern. Paul-Bernard Vogel: the Golden Age. In 1930, Paul Ditisheim handed over the Solvil et Titus and Paul Ditisheim. Vogel, heir to a prestigious family of. And married to the heiress of the prominent. Was also a member of the. Swiss watch industry's elite. Vogel moved the company's. Where he started expanding it. Vogel was one of the most prominent members of.

Of the Salon Montres et Bijoux (the Watch and Jewelry's Fair), the most prestigious association of. And jewelers of the time and used the various social events he organized to advertise his company's collections. By the 1950s Vogel, feeling the.

Shift in consumer's habits. Decided to divide its brands into two. On the one hand, the company kept producing the.

Watches it was famous for. On the other hand, it started producing lower-cost watches that fitted properly the emerging. Thanks to this new orientation, Solvil et Titus was instrumental in the development of. In 1968, Vogel took the lead of the newly founded Societe des Gardes-Temps SA , a. Of low cost watch manufacturers which was the world's third largest.

Company of the time and had a true international dimension it acquired the American. And signed a licensing agreement in 1973 with. Then Swiss watchmaking's biggest foreign investment. The item "Vintage rare, serviced Titus Swiss 17J maritime telegraph green dial wristwatch" is in sale since Thursday, July 15, 2021.

This item is in the category "Jewelry & Watches\Watches, Parts & Accessories\Watches\Wristwatches". The seller is "stonehengewatchcompany" and is located in Houston, Texas. This item can be shipped worldwide.